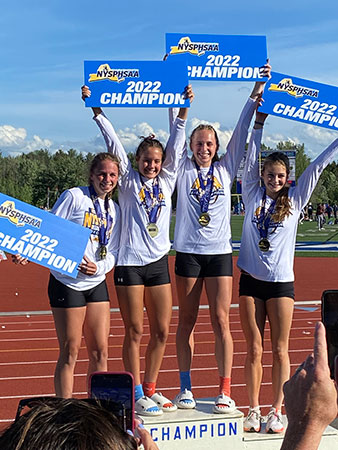 On Friday, Gianna Locci won the state Division 2 championship in long jump, with a new all-time Section 2 record of 20-6.

In the long jump, Gianna, Kelly and Kara finished 1st, 2nd and 3rd in the state.

On Saturday at the states, Gianna won the Division 2 200-meter, then competed in the federation long jump competition. Gianna jumped 20 feet, 3 inches on both her first and third attempts, winning  the gold.

Congratulations to the team and their coaches and thank you to all who have supported them. Go Warriors! We are proud of you.