Senior Sydnie Galarneau was honored at the Saratoga County School Board Association Student Awards Dinner on Monday, May 14. She was one of eleven students to receive an award.

Sydnie is a member of the Saratoga Abundant Life Church where she has run sessions for a summer vacation bible school and fundraises for the youth group as a server at the church’s cafe.

She has also helped with the Saratoga Code Blue Shelter’s clean-up and other events. Sydnie volunteers at the Saratoga Therapeutic Equestrian Program where she assist with riding lessons, barn clean-up, and exercises the horses.

Sydnie is a member of the Stillwater Theatre Club, National Honor Society, Youth Activation Committee (YAC), and she tutors seventh and eighth graders once a week. She will be attending Liberty University in the fall where she will major in biology. Congratulations, Sydnie! 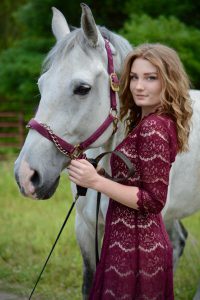