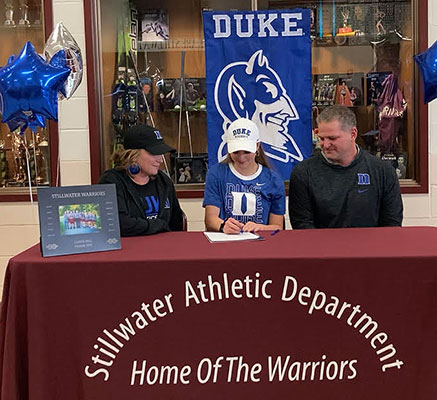 “Congratulations to Gianna on officially signing a letter of intent with Duke University for track and field,” said Mike Kinney, athletic director/PE department chair. “She will compete in the long jump, triple jump and short sprints.”

Among her many athletic accomplishments, Gianna holds the Section 2 record for the long jump.

Media including The Express and the Daily Gazette covered the signing ceremony.

The Times Union has published a number of articles about Gianna in recent months, including a Nov. 10 article about her selection of Duke and naming her Athlete of the Week for Nov. 1-7, 2021, and an Oct. 18 article about her choice of Duke over Harvard and North Carolina.