They also approved by a vote of 248 to 117 a proposition to construct a concession stand at the high school, and elected Jon Mueller (258 votes), Paul “Butch” Lilac (241 votes) and Jimel Williams (237 votes) to serve three-year terms on the Board of Education and Shay Williams (222 votes) to serve a two-year term on the board.

The 2021-22 school year budget preserves existing district programs and services with a tax levy increase that is below the state-mandated cap. The budget will cover increased personnel costs, state and federal mandated programs and services, and debt service payments associated with the recently completed capital project that are set to begin next year. The budget also funds the purchase of three new school buses as outlined in the district’s multi-year fleet replacement plan; no debt will be issued for these purchases.

Voters approved the construction of a proposed 30 foot by 24 foot concession building near the middle/high school athletic field. The district currently uses a large tent for outdoor food service to support student activities, and stores supplies in a temporary trailer. The concession stand will provide a much cleaner, efficient and safer facility for these uses.

In addition, residents approved by a vote of 271 to 98 a proposition requested by and for the Stillwater Public Library to raise $309,400, separate and apart from the annual School District budget, to support, maintain and fund the operating budget of the library. The money will be collected by the district and then forwarded to the library. The Stillwater Public Library has the same service boundary as the school district, however the library is not governed by the district. Voters also elected Heather Frank (253 votes), John Butler (215 votes) and Emily Nadler (196 votes) to the library’s Board of Trustees for at-large terms running from July 1, 2021 to June 30, 2024. 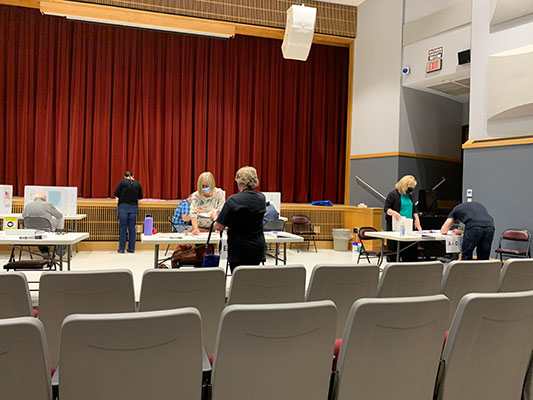 Voters casting their ballots in the Stillwater auditorium on May 18.